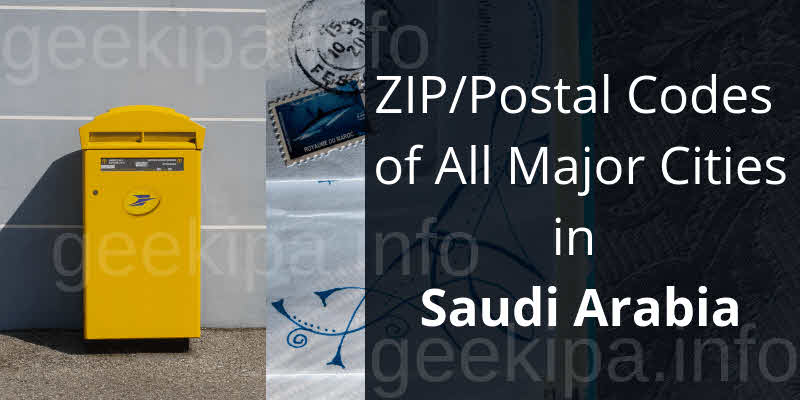 A postal code is a zip code that is a series of digits or letters or both of them. The postal and zip code sometimes for some places might include spaces, punctuations, etc. The postal code system or zip codes system was introduced in February 2005 for all countries (190) of the UPU (Universal Postal System). Whether the ZIP means Zone Improvement Plans.

It is actually a specific piece of code for a region. There are different codes for each region, place, town, city, and country. For example, a postal or zip code for Suadi Arabia and it’s cities. Major cities including, Riyadh, Jeddah, Dammam, Makkah, Madina, Sultanah, Taif, Tabuk, Al Kharj, Buraidah, etc.

In this post, I will show you all the major Saudi Arabia cities’ postal and zip codes. So have a look a the below table for all major cities and their zip/postal codes in KSA.

ZIP/Postal Codes of All Major Cities in Saudi Arabia

This is the full list of all major cities in KSA and it’s postal/zip codes:

Moreover, there are lots of countries on Earth. They don’t have this type of unique Zip or Postal address/code e.g Ireland etc. But Thanks to the great government of Saudi Arabia for all the efforts to implement the mail service in KSA.

Most of the countries, for example, the United States of America and Mexico. They use the five-digit number code for their mailing service. Also known as postal or zip code. Similarly but different country zip for Canada contains three digits of the code.

Actually, this type of code is a piece of specific address information for a region, state, province, city, town, etc.

Car Istimara in KSA | Everything You Need to Know

How to Block Sim Cards Registered on your Iqama ID

Moreover, the services of postal codes were first implemented in Ukraine and it’s cities. SSR (Soviet Socialist Republic) introduced this service in December 1932. However, it was abundant in 1939, after seven years of the first implementation. It’s now a permanent address or PIN number that varies with different countries and regions.

As we know Riyadh is the Capital of KSA. The PIN number was first implemented for Riyadh and then split to other cities and regions.

MOH and Umrah Plans to Start Preps of Umrah

Transfer of the Expatriates without Kafeel Approval